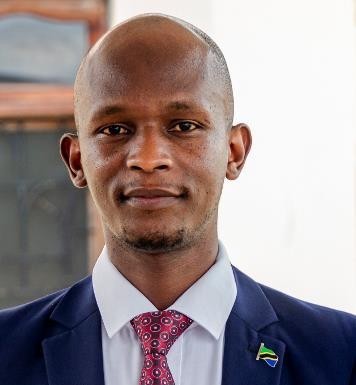 Ian Tarimo is a purpose-driven leader with over 10 years of experience as an agent of change. He believes that education is a powerful tool for solving the existing systemic challenges and shaping the future. He has been working in youth leadership development, social innovation, project management, organizational development, volunteerism and economic empowerment. His leadership style is guided by core values i.e. passion, empathy, humility, commitment, and integrity. He holds a Bachelor of Science in Information Technology.

In 2021, Ian received the prestigious Leadership Impact Award from the US State Department (through the Young African Leadership Initiative – YALI) to recognize the impact he has been making in Tanzania. He was also selected by the US State Department to represent East African youth in the Youth Townhall session by Ambassador Linda Thomas-Greenfield during The Summit for Democracy 2021. Moreover, Ian was among the ten young people who received the Builders Africa Future Award by the African Diaspora Network in 2021. Ian is passionate about addressing inequality issues through systemic change. As the co-founder and Executive Director of Tai Tanzania, Ian leads his team to use the power of combining data, storytelling and media technology to foster social behavior change in the community. To achieve sustainability, he leads his team to develop and maintain strategic partnerships with young people who are the beneficiaries, government agencies, community leaders, parents, teachers and other CSOs in his interventions. Tai Tanzania produces educational content in various formats ie. 3D animations, radio dramas, and comics. The content is then distributed through traditional and digital platforms. Tai Tanzania content has an audience of over 7 million people through various platforms. Tai Tanzania has received several awards and recognitions for its social innovation and community impact from various organizations i.e. UNFPA Tanzania, UNICEF, Tanzania Film Festival Awards 2021 and Human Development Innovation Fund (HDIF).
Scroll to top

This website uses cookies to improve your experience while you navigate through the website. Out of these, the cookies that are categorized as necessary are stored on your browser as they are essential for the working of basic functionalities of the website. We also use third-party cookies that help us analyze and understand how you use this website. These cookies will be stored in your browser only with your consent. You also have the option to opt-out of these cookies. But opting out of some of these cookies may affect your browsing experience.
Necessary Always Enabled
Necessary cookies are absolutely essential for the website to function properly. These cookies ensure basic functionalities and security features of the website, anonymously.
Functional
Functional cookies help to perform certain functionalities like sharing the content of the website on social media platforms, collect feedbacks, and other third-party features.
Performance
Performance cookies are used to understand and analyze the key performance indexes of the website which helps in delivering a better user experience for the visitors.
Analytics
Analytical cookies are used to understand how visitors interact with the website. These cookies help provide information on metrics the number of visitors, bounce rate, traffic source, etc.
Advertisement
Advertisement cookies are used to provide visitors with relevant ads and marketing campaigns. These cookies track visitors across websites and collect information to provide customized ads.
Others
Other uncategorized cookies are those that are being analyzed and have not been classified into a category as yet.
SAVE & ACCEPT